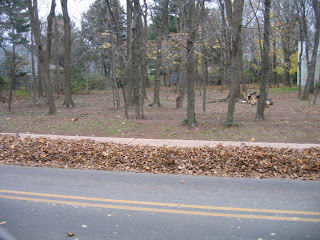 A vast deluge of leaves will soon be falling on Princeton, and the question is what to do with them all. For as long as can be remembered, most people have raked them into the streets and let the town scramble to clear away the resultant mess. Given how much homeowners pay in property taxes, it's understandable why people feel they should take advantage of one of this high-visibility service the town provides.

But I would argue that this tradition is needlessly expensive, dangerous and destructive, and that there are alternatives that could easily be adopted by most homeowners without any aesthetic or physical sacrifice.

Consider the above photo, taken last fall, which shows how one homeowner goes to the trouble of cleaning a woods. The homeowner no doubt likes things tidy, which can be seen as admirable, but let's take a look at the string of events this purging of leaves from the property sets into motion:

Leaves that were providing nutrients for the trees, and protection against soil erosion, are blown by a hired crew out into the street, where they block traffic near a school, pollute the local streams and must then be hauled out of town at community expense. In other words, leafblowers are used to create a solid waste problem, requiring more machines to carry the leaves away, grind them up for industrial-scale composting, then haul the leaf mold somewhere for final use.

In the age of global warming, it's hard to rationalize the extravagant consumption of fossil fuels this landscape practice demands. If the homeowner is not comfortable with the blanket of leaves the trees are trying to lay down for themselves, a much less harmful alternative is to place them in a wire corral in the back corner of the property (see post above).

But needless fuel consumption is only one of many reasons why the status quo is harmful to the community:

Increased Flooding: The annual mass removal of leaves from the urban landscape reduces organic matter in urban soils. This makes the ground less able to absorb rainwater, which increases flooding in local creeks.

Water Pollution: Though it's not obvious from the looks of things, the streets we walk on, drive on and dump stuff onto are essentially dry creekbeds, directly linked to the town's streams. Leaves dumped in the street invariably get rained on, start to decompose, and then release nutrient pollution into waterways before they can be picked up.

Energy consumption: If the township and borough are going to reduce energy consumption by 25%, in an effort to reduce the local impact on global warming, one place to start is by reducing the need for big rig caravans scooping or vacuuming up leaves along the street. In the borough, it's impressive to watch The Claw deftly scooping up leaves, but it burns a lot of gas, as do the massive grinders that triple-shred the leaves out at the Ecological Center. The export of leaves from town also requires burning more gas to then haul them back into town, in the form of mulch and compost.

Safety: Leaves on the street force cars out across the center line, and can cause fires if hot mufflers or catalytic converters on parked cars touch dry leaves. Where there are no sidewalks, pedestrians and bicyclists are forced towards the center of the street. Blockage of stormdrains by leaves adds to these problems.

Tree health: If we want to promote healthy trees in town, it's hard to imagine a happier tree root than one infiltrating the rich leafmold on the underside of a leafpile.
Most properties with big piles of leaves out at the curb have room on their lot for a leaf pile that will quickly and dramatically reduce in size over the winter. Perhaps there's a way to mix education and an incremental change in policy that would allow Princeton to trade one tradition for another that makes more ecological and horticultural sense.

Expense and diversion of staff from other municipal services: Leaf collection increases wear and tear on town vehicles and draws town crews away from other services they would ordinarily provide yearround.
Posted by Steve Hiltner at Monday, September 10, 2007