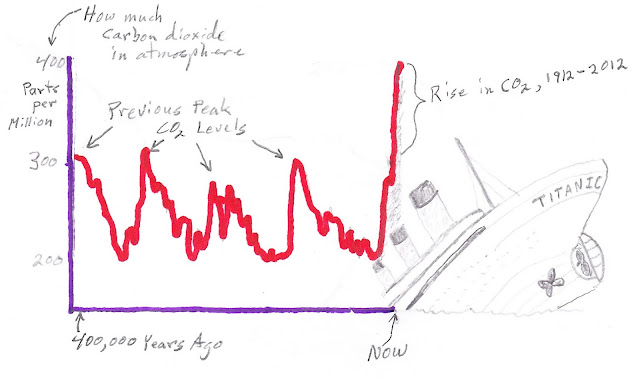 Today I had an opinion piece published in the Trenton Times, a newspaper still afloat despite treacherous economic waters. The piece, entitled "Earth's passengers should learn from the Titanic," offers seven factors that primed the Titanic for disaster, and how those same factors are contributing to the current unfolding calamity of climate change. (Note: As of April 15, the piece is archived at NewsCompanion.com, here.)

Most people are aware that carbon dioxide (CO2) is being pumped into the atmosphere by cars, furnaces, power plants, and myriad other machines, and that the CO2 warms the planet. Some CO2 in the atmosphere is good; too much and the extreme result is Venus, where it's 850 degrees.

The cartoon shows a fictional encounter between two tragedies--the sinking of the Titanic and the unprecedented rise of carbon dioxide levels in earth's atmosphere. The graph is a rendering of how the amount of carbon dioxide in the atmosphere has changed over the past 400,000 years on earth. The squiggly red line shows that carbon dioxide levels were fluctuating between about 200 and 300 parts per million until very recently. Each trough, recurring every 100,000 years or so, represents an ice age.

The big departure from that repeating cycle happened 200 years ago with the industrial revolution, at which point we started digging up coal, oil and natural gas and releasing all that stowed carbon into the air. The red line surges upward, with carbon dioxide levels having risen 40% due largely to human activity. What's really important to note here is the unprecedented speed of this rise. Even the sharp increases that occurred naturally took 10,000 years to play out, allowing nature time to adjust. We're now expecting nature to adapt to extraordinary changes wrought over a century or two.

For more info on this kind of graph, google "carbon dioxide record" and then click on "images". Clicking on an image takes you to the associated website. Or take a look at this link.

For Titanic aficionados, note that the last smokestack has no smoke rising out of it. The rear-most smokestack on the Titanic was added just for show, to give the impression of greater power and speed. When we reach the point where machines no longer use fossil fuels, and have exhaust pipes just for show, we'll know we've made progress.
Posted by Steve Hiltner at Thursday, April 12, 2012 No comments:

Though a version of the following essay was first published in the Princeton Packet, it could refer to any town navigating the 21st century in a climate of national and international inaction.


In the 1960 musical Camelot, they knew that climate is key to “happy ever-aftering”. With Richard Burton’s voice ringing in my ear, I looked back at the lyrics. “A law was made a distant moon ago here: July and August cannot be too hot. And there’s a legal limit to the snow here, in Camelot.” Some heat, some snow, but not too much--it sounds like a call for moderation, more like New Jersey’s accustomed climate than the shades of South Carolina quickly headed our way. Haven’t you heard? Our 12 months straight of warmer than normal weather are not a fluke, and the increasingly extreme weather events of the past year are what climate scientists have been predicting all along.


Surely Princeton thinks itself as congenial a spot as any for happy ever-aftering, yet climate appears nowhere on any list of priorities. When the Princeton borough mayoral candidates were asked at a debate last fall about what Princeton could do to confront the challenge of climate change, the audience snickered. Was the reaction an indication of widespread denial of the problem, or denial of any solution? Probably a mix of both. In either case, human intelligence has been cleverly applied to conclude that nothing need or can be done.


It’s understandable that people would feel helpless and even resentful in the face of such a challenge. After all, what can one town do about a problem that is global in scope? Less forgivable are attempts to fabricate doubt about the overwhelming scientific consensus that climate change is real and human-caused. I think of it in moral terms. Morality doesn’t wait for the world to agree, and local action can grow into a much broader movement. A central motivation is that with freedom comes responsibility, and it is deeply unjust that the consequences of our freedom (to burn fuels that will irrevocably and radically change the climate) are posterity’s permanent responsibility.


For an example of someone exercising freedom without any accompanying sense of responsibility, consider the captain who ran the cruise ship Costa Concordia aground, risking 4000 lives for the sake of showboating his gleaming machine. The captain, in deciding to steer close to shore, did not factor in the risks of doing so. He apparently ignored the modern navigational equipment on hand, and when the rocks appeared ahead, the ship’s momentum made a rapid change of course impossible.


Our navigation of the 21st century shows disturbing similarities to this indifference to risk. The potential downsides of our climate-altering activity abound. The ice sheets perched on Greenland, which are starting to sprout rivers deep in their interior that could lubricate their plunge into the Atlantic, hold enough ice to raise sea levels by 20 feet. Parts of Antarctica, which holds enough ice to raise sea levels 200 feet, could also become unstable. It’s hard to say when ocean acidification, thawing deposits of methane up north, and climate-driven shifts in ocean currents could trigger rapid transformations. As the cruise ship captain discovered, worst case scenarios need to be taken seriously, and momentum can limit options later on.


Even if current warming raises sea levels only three feet this century, that would displace the NJ coast 300 feet inland, causing tremendous damage to barrier islands, beaches and accompanying real estate. If you think government is too big now, just wait until it has to intervene in increasingly desperate attempts to save low-lying properties while providing disaster relief for radicalized weather. By opposing government intervention in emerging problems, we insure more government intervention later on.


It’s common to dismiss collective action as smacking of socialism, but we act collectively whether we intend to or not. Carbon dioxide derives its power from acting collectively--each molecule absorbing miniscule amounts of heat that, to take an extreme example, has warmed Venus to 850 degrees. Our machines, while serving our needs, pump long-buried hydrocarbons into the air as CO2, in the process collectively increasing earth's atmospheric blanket of CO2 thus far by an astonishing 40%. We ignore the power of collective action, for purposeful good or unintentional harm, at our peril.


Princeton occupies a special place in the quest for a safe route through this century. Some of the world’s most prominent climate scientists teach here. As civilization’s lookouts, they’ve offered abundant warning of the trouble ahead, and possible ways to avoid the worst of it. Despite some small, spirited initiatives, the town itself has largely ignored the profound urgency scientific findings imply, demonstrating in miniature the chasm between knowledge and policy that is playing out nationally and globally.


In a morally ambiguous age, begin by accepting that machines are simultaneously our best friends and worst enemies. As individuals and as a unified municipality, our goal must be to reduce machine use until more ethical fuels become plentiful. Cultivate ambivalence towards anything needing an exhaust pipe or chimney. Reduce the flow of energy through the umbilical cords that feed our fetal indoor lives. The energy you don’t use now is a generous gift to the future. One little-noted aspect of so-called sacrifice is that one can get good at it, and even find pleasure in a less mechanized life. In the ongoing election of a future, Princeton’s vote is a small one, but more prominent than most.
Posted by Steve Hiltner at Friday, April 06, 2012 No comments: