The first thing to know about central air conditioning is that turning the thermostat way down doesn't make the house cool down faster. The thermostat is not like a throttle or an accelerator pedal in a car, but instead simply turns the A/C on or off. It matters to know this, because the tendency otherwise may be to turn the thermostat way down in an effort to cool the house quickly, then forget to adjust it later on. The A/C ends up running and running, attempting to cool the house to a temperature lower than you actually want or need. The best thing to do is set the thermostat at the temperature you want. The house will cool just as quickly.

A central A/C unit typically draws a whopping 3500 watts of energy while on. I've come to associate the hum of the A/C with the blowing up of mountaintops in West Virginia, which may be the source of coal used to generate those watts. Most people are oblivious to such dramas hidden behind the facade of everyday domestic life.

The second thing to know is that ceiling or floor fans, which only use 20 or 30 watts of electricity while running, can help you cut back on A/C use. What we've found, as we progressively try to trim the use of A/C in the house, is that it's possible to gain enough comfort on hot days by using a mix of ceiling fans and A/C, with the A/C on just enough to lower the humidity in the house. Of course, when the A/C is running, all the windows have to be closed. Otherwise the heat and humidity from outside just pours right back in.

Our central A/C system, while not the worst, is not exactly state of the art. It pushes coolish air through a labyrinthine system of ducts, and sometimes labors to bring the house temperature down below a certain point. With the thermostat set at 81 on a 95 degree day, it cuts the humidity nicely, then turns off. The fans do the rest. Set it at 78 and it may lumber on for long periods without achieving much gain in comfort. Some may think 81 sounds a tad high, but fans are said to make it feel 4 degrees cooler, and over time our bodies have grown accustomed to a broader range of temperatures. A little bit of adaptation now could save a lot of adaptation later on.

A couple degrees adjustment of the thermostat, then, can make a big difference in how much the A/C runs. If it's running constantly, try nudging the thermostat upwards to give the A/C, and the planet, some relief. Wear shorts and t-shirt, or something similarly light, and let the fans do the rest.
Posted by Steve Hiltner at Wednesday, August 18, 2010 No comments:

We're back in the kitchen here, for another segment of Climate Change Cookery.

For most of my adult life, I have been a passive lover of beets. Passive in the sense of eating them only when they present themselves in a prepared form--at a salad bar or in a pickle jar. I took their red color to signify the presence of important nutrients not necessarily present in other foods.

It never occurred to me to cook them myself until recently, and immediately a serious obstacle presented itself. They take a long time to cook, and in the middle of summer, in the middle of the unfolding climate change debacle, it's hard to contemplate boiling anything on the stove for long periods, or firing up the oven. Hot house, hot planet.

All of this was solved by friend Dorothy, who served a delicious raw beet salad at one of her dinners. Recipes can be found easily on the internet, but an improvised approach involves peeling and grating the beets, adding some olive oil and an acid like vinegar, lemon or orange juice, and throwing in some chopped parsley, ground up nuts, and something oniony like chives. Some recipes call for goat cheese. Another friend added corn and grated carrots to expand the nutritional aspect.
Posted by Steve Hiltner at Saturday, July 24, 2010 No comments:

The Domestic Shift To Summer

It's late spring, the weather is warming, and it is time for timeless rituals of the season to unfold at this household.

Screens, taken off last fall to allow more sunlight in through the windows, follow traditional (two year old) migration routes up from the basement. The last of the cured firewood is burned in the wood stove on still cool mornings. And the cold water that at least one of us uses to handwash dishes--on the premise that water that isn't hot enough to kill germs only makes them stronger--feels more pleasant. The hot water heater gets turned down a notch, so that it's just hot enough to deliver a comfortable shower without any dilution from the cold water tap. Showering styles remain stubbornly diverse, from lengthy dousings, passionately defended by the resident teenager, to the navy approach of turning the water off during scrub downs.

The house cruises through late spring without the aid of furnace or A/C, sustained through cool nights by a reservoir of heat absorbed during the day. Its ballast of cool air in the basement keeps it steady through brief hot spells. Trimming shades and windows is all we need to do to keep this ship on a steady course of comfort. We'll reach the tropics of summer before long, but for now it's possible to make comfortable headway across the seas of time without the help of machines.
Posted by Steve Hiltner at Tuesday, May 11, 2010 No comments:

CO2 on Mars and Venus

It's easy to be fooled by CO2. Odorless, invisible, a benign part of every breath--what harm could possibly come of pouring more of it into the atmosphere?

According to my notes from a talk at Princeton University by Michael Oppenheimer, the extreme heat of Venus, and the extreme cold of Mars, are not so much a matter of their distance from the sun but of how much CO2 is in their atmospheres. Venus has a very high concentration of atmospheric CO2, while the concentration on Mars is very low. A quick check on the internet yielded the following: Venus has temperatures approaching 900 F, while the surface of Mars rarely gets above freezing.

In other words, the amount of CO2 in the atmosphere has everything to do with whether a planet is too hot, too cold, or just right.
Posted by Steve Hiltner at Saturday, March 20, 2010 No comments:

A Strategy for Efficiently Lighting Your Home

Recessed lighting can be a wasteful way of lighting rooms in your house. If they are on dimmer switches, and/or use halogen lights, they can be expensive to retrofit with compact fluorescent bulbs (CFLs). A friend recommends the following approach to reducing dependence on recessed lighting, while still having a pleasing light.

"My solution at home is to keep the halogens dimmed and use large CFLs in torchiere style lamps for the primary lighting in those rooms."

Seek out the torchiere lamps that use compact fluorescent bulbs rather than the potentially dangerous and less efficient halogens (they get very hot and could start a fire if the lamp is knocked over).

Tennis Balls in the Laundry 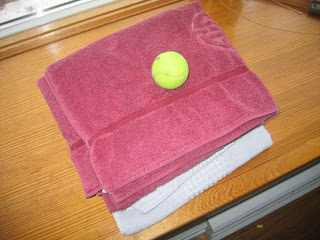 One way to cut back on energy use is to air dry the laundry. This works for most clothing, and may actually reduce wear and tear, since the lint in the dryer is evidence of loss of fibers when clothes are machine-dried.

But the scratchiness of air-dried towels has not gone over well in our household. One trick I've heard of is to air-dry towels, then put them in a dryer with a tennis ball or two, using the unheated fluff cycle to soften them up. Worth a try.

One can actually buy specially designed balls to use in the dryer with wet clothes. They reportedly speed the drying.
Posted by Steve Hiltner at Thursday, March 04, 2010 2 comments:

Windows and Heat in the Winter 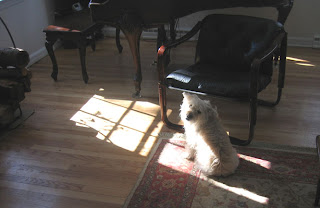 Dogs know where to find comfort. Most homes, like this one, bathed by solar radiation in the winter, spurn most of that free heat. You'd think that home designers would have widely exploited the way the sun conveniently bends down low in the winter, sending light and heat streaming deep into a room through any welcoming window. But instead, passive solar homes are a rare exception. Blame the usual suspect: cheap energy. 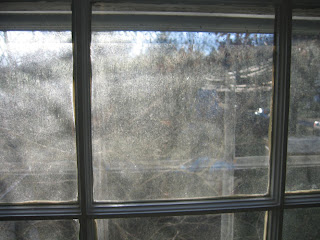 We try to make our house as welcoming to the sun as its standard design allows, making sure the shades are up during the day and the screens stored in the basement. Most years, I get around to cleaning the windows in the fall. The combination of metal screens and dirt on the windows can reduce how much sunlight gets in, which this window illustrates all too well. 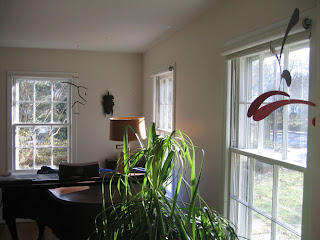 On a sunny afternoon, the greenhouse effect is noticeable, warming the house and giving the furnace a rest.


Posted by Steve Hiltner at Wednesday, February 10, 2010 No comments: