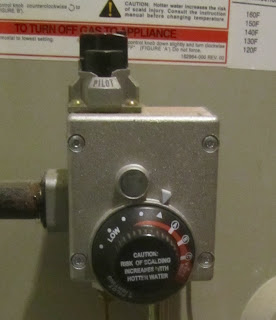 Of all the houses I've lived in, this is the first in which it occurred to me to change the temperature control on the hot water heater. They're so quiet and unassuming, tucked away somewhere in a closet or the basement. If by rare chance you encounter it during daily domestic ramblings, it's not likely to give off that "Come and adjust me" kind of vibe.

Turning the water heater back on after a long vacation, I happened to adjust the temperature control so that the hot water for the shower was consistently just right. No cold water needed. Just turn on the hot.

Through this chance discovery, the hot water heater now burns less gas, and there's no longer a need to fiddle with the cold and hot water knobs before and during the shower.

Not to say this will work in all homes. Serendipity may be playing a role here, involving the rhythm of hot water use in the house, but for the sake of some simplicity and economy, it's worth a try.

Update, Feb/2012: This approach continues to work very well, for everyone in the family. The logic is that the hotter the water in the tank, the more heat is lost through the tank's walls, which means more energy needs to be applied to keep the water at that high temperature. This past summer, we left the water heater on low after returning from a vacation, and actually found the coolish showers refreshing during hot weather.

Adendum: Electric water heaters may be a little harder to adjust, as the temperature adjustments are typically behind metal covers, and there may be separate adjustments for upper and lower heat coils. Lots of tutorials can be found via internet search, with this link as an example. Since electric water heaters are less efficient than gas ones at heating water, learning to adjust them is worth the extra effort.
Posted by Steve Hiltner at Sunday, January 13, 2008 No comments:

Compact fluorescents have come a long way, but they work better in some spots than others.

Start with outdoor lighting that is on for long periods, and utility areas. I've been impressed with the fluorescent spotlights (though less advantageous for motion sensor lights, since the light is only on for brief periods), and have put the regular CFLs (Compact fluorescent lights) in enclosed outdoor fixtures without problems.

For indoors, the light they give off is much improved, and can be softened further by using them in lamps, where the glass or lampshade will add yellow to their glow.

For rooms with recessed or track lighting, or where dimmer switches make fluorescents problematic, it may work better to simply create a fluorescent alternative in those rooms rather than replacing the more wasteful bulbs. That way, when the room isn't being used but one wants some sort of light on, a lamp or overhead with a florescent can be turned on, with the other lighting reserved for times when you want additional or more ornate light. (Note, Feb/2012: Recently, realizing we rarely used the dimming function, I replaced the dimmer switch for some overhead lighting with a regular switch, so that regular CFLs could be used.)

Some people wait until an incandescent bulb burns out before replacing it with a compact florescent. My thinking is: Don't wait. Start reducing energy consumption now, and if you don't want to throw out a still-functional incandescent, then store it away, as a backup for those few spots where incandescents are more appropriate, for instance where a light is only used for a few minutes at a time.

Compact fluorescents are cheaper than most articles say. Recently, I found both 60 and 75 watt equivalents selling individually for 75 cents each at Walmart (strangely, packages of multiple bulbs in another display in the same store were more expensive per bulb) (On a subsequent visit, the bargain display had disappeared--a "one time deal" according to one of the employees). The big box hardware stores usually have 60 watt equivalents for $1 each these days (As of 1/16, they are more like 3 for $5).
Posted by Steve Hiltner at Wednesday, January 02, 2008 No comments:

An Energy Meter in Action 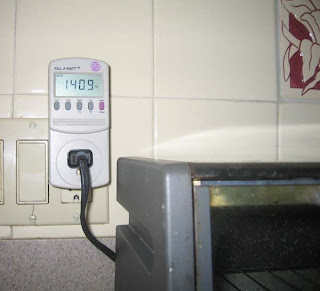 The Kill-a-Watt is a useful tool for getting a handle on some of your energy use. It can test anything that plugs into a regular wall socket, up to 1850 watts.

Here it is in action, measuring how much electricity a toaster oven uses. 1400 watts is 100 times as much as a florescent bulb uses, and about half as much as a small electric dryer. 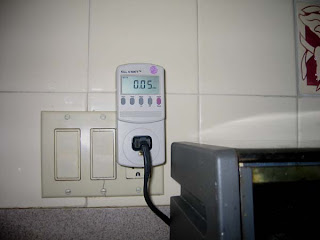 A toaster uses lots of energy but for a very short time. Press the red button on the right side of the Kill-a-Watt meter and it tells you how much energy the toasting of toast took--a grand 0.05 kilowatt hours. That's about one penny's worth of energy--about the same as having a 50 watt light bulb on for an hour.

Obviously, toasters are not toasting the planet, but check other appliances and you're sure to find some unnecessary drains on energy. The device is particularly good for finding and measuring the energy used by electronics even when they are off.
Posted by Steve Hiltner at Wednesday, January 02, 2008 No comments: